THE CHALKBOARD DUST SETTLES, OR 'WHAT HAPPENS WHEN YOU CLEAN YOUR SLATE'

In my last post I mentioned that I'm doing a total overhaul of my possessions, whittling away at a sea of "seriously-why-am-I-keeping-this" items.  So this week I spent a couple evenings alone in my basement, cross-legged on the floor and rifling through boxes of papers.  And among the chaos of Rubbermaid totes and piles of old papers that awakened both the good and bad spirits of days gone by, the Ghost of Melanie Past took me for a walk down Memory Lane, present-day Melanie filling the silence with a chorus of "omg... omg... O.  M.  G."

Among other things, I found all my notes from elementary school (remember passing notes??), tucked away in a shoebox.  And not just any shoebox.  A box that once contained Adidas sandals.  Remember when the "jail shoe" slide sandals first became uber cool?  Yeah, I got me a pair of Adissage slides and then stuffed that box with notes from my friends.  Ah, what wonderfully strange comfort for one's feet.

Apparently I've kept everything I've ever written.  I kept my "take me back" letter to a high school boyfriend, a letter that just about broke my heart when I read it this week (would make for a fabulous Nicholas Sparks novel... but in reality  it was probably modeled after one).  And if you can believe it, I found story upon story upon story upon story.  Ah, the written works of a younger Melanie.  Stories like:
And then I found things like this: all my "brilliant ideas" that would make me a millionaire: 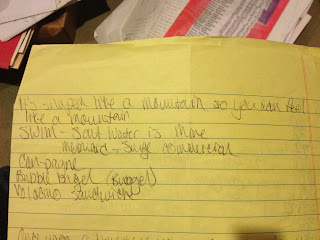 I found what's probably one of the first emails I ever received, from my 7th grade boyfriend Mike: 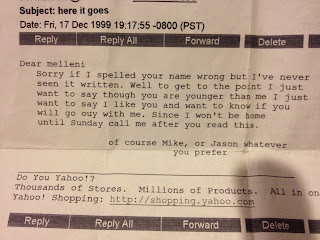 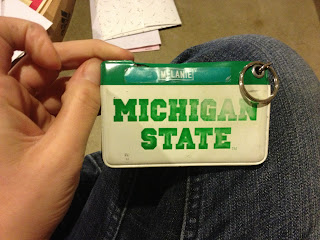 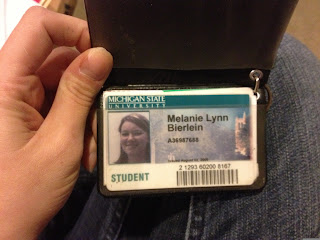 Birthday cards from my sister Liz (isn't she just... so... nice...?)  I love how the inside of every card says, "Just kidding!!!"  Apparently you don't know how to kid properly, dear sister.  Cuz we should both be laughing.  just kidding. :) 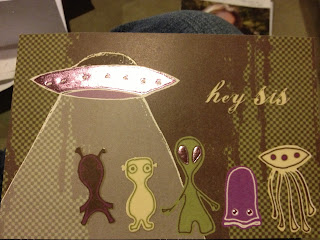 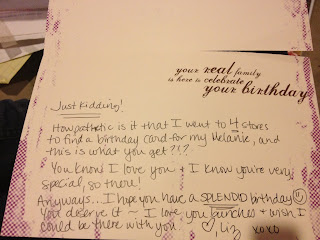 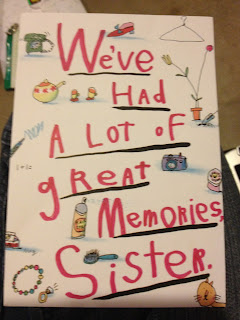 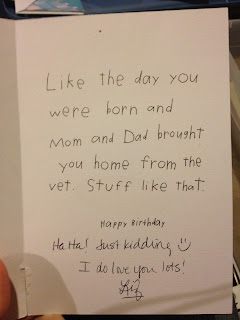 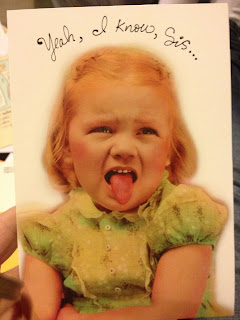 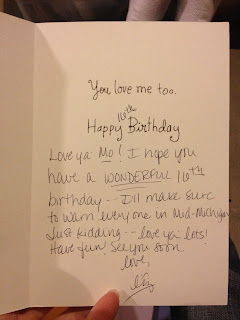 A birthday card from my friend Ashley, featuring a boy eating urinal cakes (this was appropriate because we had gotten revenge on an ex-boyfriend by stealing urinal cakes from our high school janitor's closet, and stuffing them in his locker and his truck... just imagine THAT): 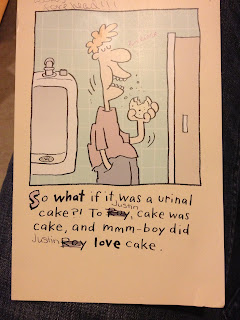 The card from a bouquet of flowers sent to me by "my dog" during high school (thanks, Mom): 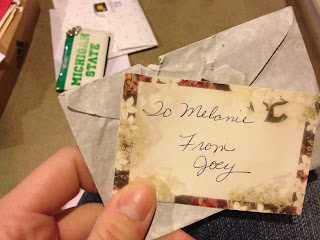 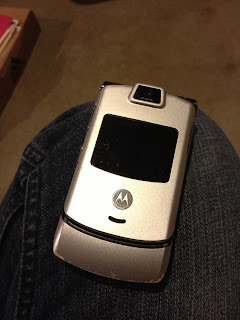 Placemats from either a very late evening or a very early morning at a truckstop with my friends Jenna and Keri (featuring things like the Bennigans birthday song, and what appears to be an Australian kangaroo who enjoys Christmas): 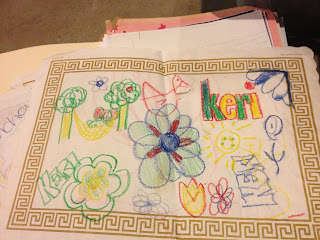 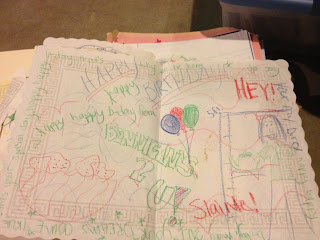 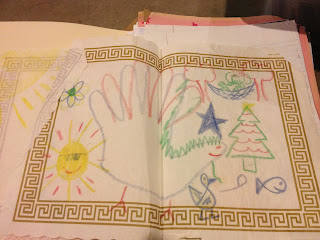 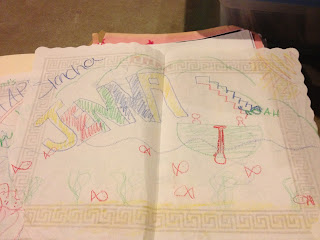 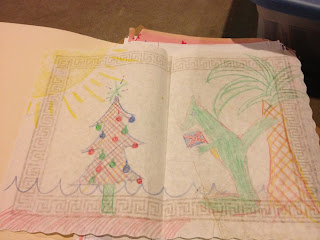 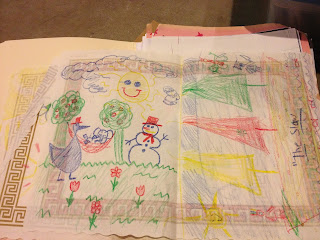 my stack of Post-it note decoration from my first "big girl" job: 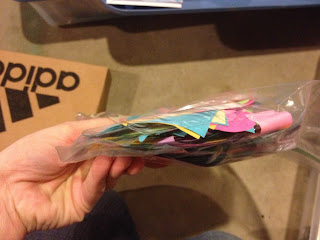 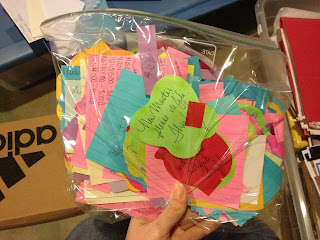 3 diaries from an 8-year-old Melanie (oh I bet there's some good stuff in there): 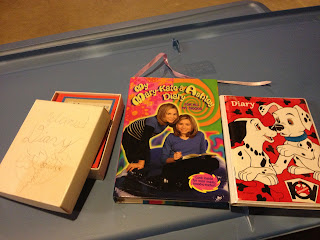 the weekly grades of both myself and Jacob Bauer from 10th grade CL/CP class: 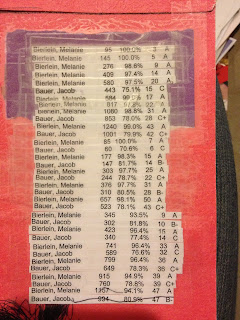 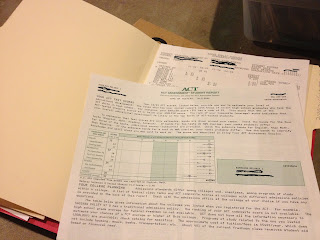 and the absolute JACKPOT: a cryptic letter I received when I was 13.  This letter was in code, did not include a key, did not have a return address on it, and was postmarked in St. Louis, MO.  Young Melanie received it and her mother immediately went crazy trying to decipher it.  Turns out, it was a love letter written by a boy who went to school with me for a year and then moved away.  He didn't have the guts to write the letter in English, so he MADE UP his own code (I kid you not) and professed his love for me that way.  Um.... 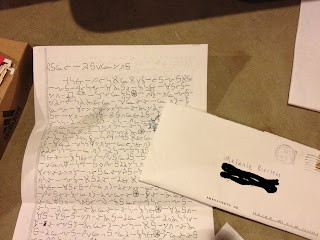 And this is what I ended up with... a pile of stuff that [oh guess what] I still can't bear to part with. 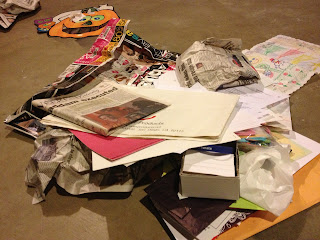 O, Memory Lane, how sweet you are.

Posted by Melanie Bierlein at 3:23 PM

Enter your email address to receive the blog in your inbox (it's free!)

MY BEST WORK (according to you)